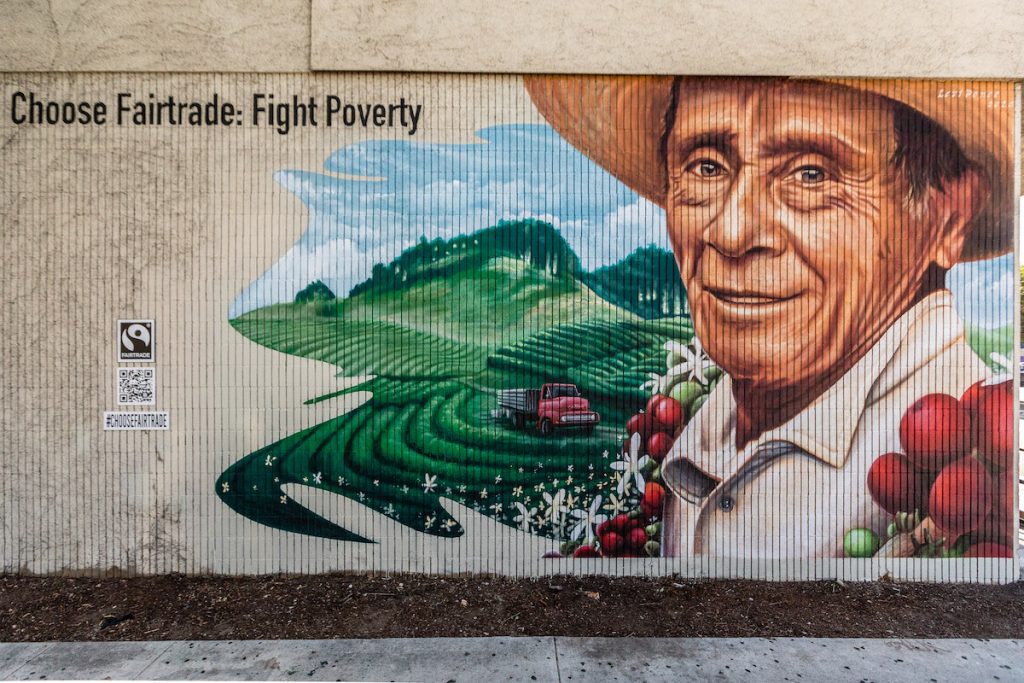 In honour of October as Fair Trade Month, Fairtrade America is launching a national campaign to generate broader awareness how purchasing a Fairtrade certified product can make a difference in the lives of the almost 2 million farmers and workers participating in Fairtrade across the globe.

The Choose Fairtrade: Choose the World You Want, campaign features murals in three major United States cities – Denver, Los Angeles, and Nashville – that connect stories of the people who produce the things we count on every day, such as coffee, to the positive impacts of Fairtrade.

The campaign also includes online giveaways and Fairtrade resources for consumers. Fairtade say when shoppers see the Fairtrade America label on a product, it means farmers were fairly compensated and in compliance with gender equality, fair wage, climate change, and child labour standards.

Fairtrade America partnered with notable mural artists and key retailers in three major metropolitan cities where mural art is already a prominent part of the culture. Each mural features a real farmer‘s image and a key benefit of choosing Fairtrade. While consumer awareness and purchase intent of Fairtrade products is increasing in the US, this campaign is intended to educate more Americans about the value of purchasing Fairtrade certified products.

“For generations, art has inspired conversation of issues and hope for change. Fairtrade America is proud to commission murals that celebrate the men and women who work hard to produce staple goods we enjoy,” says Peg Willingham, Executive Director of Fairtrade America.

“We hope this campaign connects the dots between the choices we have as consumers to purchase Fairtrade certified products and the differences made in the lives of people who produce and grow our food, and our planet. Fairtrade envisions a world in which all producers can enjoy secure and sustainable livelihoods, fulfill their potential and decide on their future.”

In Denver, Fairtrade America partnered with Kaladi Coffee Roasters to depict its mural. The local mural artist Giovannie “Just” Dixon, portrayed Natividad Vallejos, who has been a Fairtrade certified coffee farmer for 15 years. She and her fellow farmers have collectively invested in community projects, such as children’s libraries, schools, health, and nutritional education, and programs that build self-esteem, human rights awareness, and literacy.

“When consumers look for and choose to buy Fairtrade products, they are helping to empower farmers and workers, enabling them to strengthen their communities,” continues Willingham.