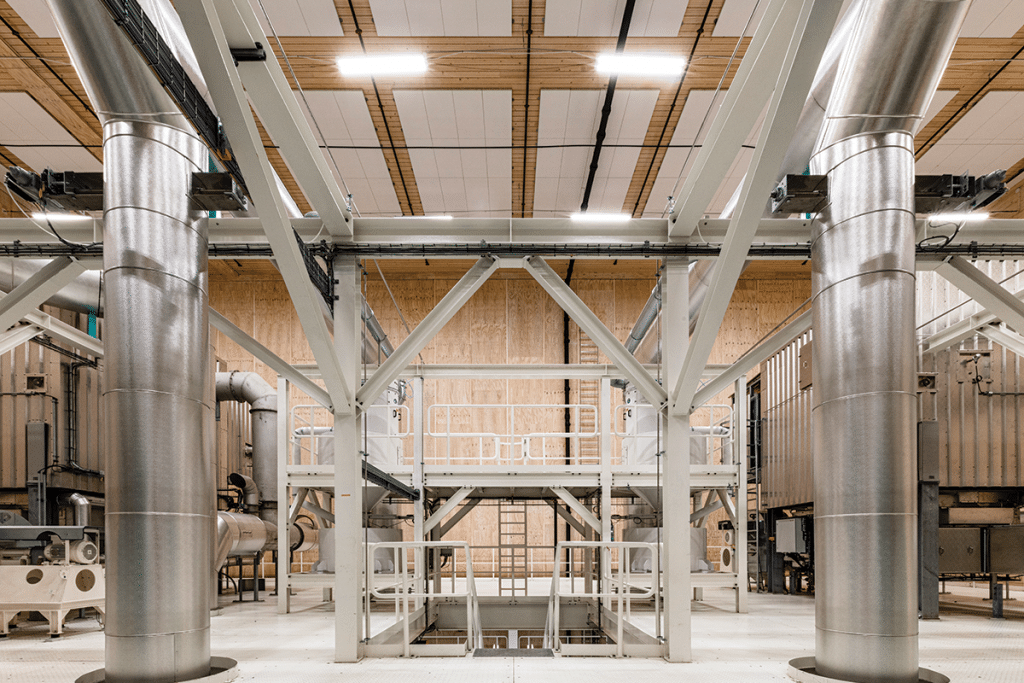 At Treveien in Vestby, Norway, lies a coffee production plant built almost entirely of wood. The 8800-square-metre building stands out from the others in the area with its eye-catching cross-laminated timber façade among luscious green fields. As Norway’s largest industrial wood building, making up 90 per cent of its construction material, the plant is a strong statement of Joh. Johannson Kaffe’s commitment to achieving climate neutrality. But while the building’s exterior has gathered industry praise, it’s what lies beneath the surface that matters most.

When Joh. Johannson Kaffe awarded the construction contract for its new coffee processing plant to Bühler in June 2017, the plan was to achieve the lowest greenhouse gas emissions possible and deliver one of the world’s most advanced facilities for coffee production, capable of roasting up to 12,000 tonnes of coffee per year.

“How we would achieve this, we didn’t know at the time,” says Bengt Ove Bitnes Hagen, Production Director at Joh. Johannson Kaffe. “Bühler showed that they could provide solutions for all our complex requirements and maintain the excellent flavour of our coffee. That’s why we implemented the project with them as a full-service provider.

“We have asked a lot of Bühler. Thanks to their solutions, we are recovering nearly all the energy used in our roasting process. Together, we have achieved the goal of protecting the environment sustainably and for the long term. In addition, we save energy costs and are even more profitable as a result.”

“We were convinced that we were the right partner for such a complex coffee plant. In addition, it underlines our overall company strategy to be the number one partner when it comes to energy- and emission-improved coffee plants,” says Daniel Egy, Managing Director Chocolate & Coffee Group EHS Officer at Bühler.

It is equipped with low emission burners and is process-optimised to emit less energy compared to similar applications. The residual heat or energy of the roasting process is recovered by heat exchangers that heat water up to 100°C. It is then sent to accumulator tanks in an energy centre. Most of the energy stored from the energy central is reused for the same roasting process and preheating green coffee beans.

“In this way, we do not need to use high level energy such as burning biogas or electricity to create low-level energy [to achieve the final temperature in the coffee roaster],” he says.

To ensure the new plant uses residual waste heat in the correct way, Joh. Johannson Kaffe has even established its own purpose-built energy centre, something it never had the technology to do at its old plant in Filipstad.

Generated thermal heat is used to optimise a Regenerative Thermal Oxidiser for energy emission control. This process renders the plant’s exhaust gases harmless by burning off organic matter. After the pre-heating of green coffee, excess energy is used to heat Joh. Johannson Kaffe’s offices, laboratories, packaging department, and shipping and receiving area. The total balance of electric power required by the factory is covered by huge photovoltaic solar cells.

The energy supply at Joh. Johannson Kaffe’s new facility is secured through energy wells in the ground and extensive use of solar cells on the south, west and eastern walls. These solar cells form a significant part of the facade. A total of 1280 panels have been installed with a total power of 365 kilowatts peak. The electrical energy is delivered to the building and used internally. Estimated annual production is approximately 218,000 kilowatts peak. Arrangements have also been made to mount solar cells on the roof.

Thanks to permit changes and governmental subsidy incentives, Egy says Bühler is experiencing an increased demand from customers wanting low-emission and energy-improved facilities.

“A lot of energy is used in the roasting industries, such as coffee, nut, and cocoa. I strongly believe there is a social and environmental responsibility of the suppliers, like Bühler, and operators like Joh. Johannson Kaffe to ensure that plants are built and operated in the most efficient way to reduce the carbon footprint. Technical solutions are available and should be used whenever possible. Consumers are also increasingly paying attention to the production of the product and taking this into account as a purchasing criterion,” Egy says.

The new plant, estimated to have cost around NOK625 to 650 million (about US$73 million), now consumes 85 per cent less CO2 emissions compared with its old production facilities. The plant is built for climate-neutral operation – producing as much, or more, energy than is required to operate the building.

Together with the use of renewable energy, Joh. Johannson Kaffe is proud to call itself “Norway’s most environmentally-friendly coffee roastery”.

“From this plant, we supply our customers with outstanding coffee with excellent flavour – a premium product. The fact that we have reduced energy and CO2 emissions to an absolute minimum is a compelling selling point,” Hagen says.

He adds that Joh. Johannson Kaffe’s commitment to long-term sustainable goals is evident in the construction process of its new building, and the materials used in accordance with stringent environmental requirements and international standards.

Solid wood is used in the ceilings, walls, floors, stairs and elevator shaft. Some of the wood was even imported from Austria because the Norwegian wood industry could not deliver the supporting beams in the required dimensions.

The building far exceeds Tek17 requirements, a building standard that implies that the construction process itself should put the least possible burden on natural resources and the external environment. The building is also certified to BREEAM-NOR Excellent standard, the Norwegian version of the BREEAM certification, the world’s oldest and Europe’s leading environmental certification tool for buildings.

Hagen says the coordination between contractors, machine suppliers and Joh. Johannson Kaffe was the greatest challenge during the build. But most rewarding, is coming to work and seeing the roastery in all its glory.

“Together with our suppliers, we have shown that it is possible to create an industrial-sized roastery with a Breeam Excellent certification. Our use of solar power, energy wells, efficient roasters and equipment, a common energy central for both the process and the building is perhaps not revolutionary if you see each of the elements singularly, but to put them all together – and make it work – is proof that it can be done,” Hagen says. “Joh. Johannson Kaffe is committed to doing as much as possible to reduce our climate impact and we have done just that with our new roastery. No, we aren’t climate neutral without compensating measures, but we have done what was possible to reduce our own emissions.”

To help maintain its high standards for a long and sustainable future, Joh. Johannson Kaffe has also set itself a goal that the facilities at Vestby will house a competence centre for coffee alongside its production facilities.

“Coffee is an incredibly exciting raw material that can provide great taste experiences, but it requires that the coffee beans are processed correctly throughout the production process right through to the consumer. For us, it is important to contribute knowledge about how to get the best taste experiences through our brands [Ali, Evergood and Norway’s Everoog Kaffe],” Hagen says. “We want to contribute to this through the establishment of a professional environment that is actively concerned with how to produce quality coffee. In doing this, we will contribute to good coffee experiences for Norwegian consumers in the years to come.”